Shame on WHO? Mr @NajibRazak or @anwaribrahim ??

Shame on WHO? @NajibRazak or @anwaribrahim ??

Their official website illustrated the meeting as … “a cornucopia of intellectual fare with some 260 sessions on everything from the Secrets of the Universe to Fixing Capitalism, and a cast of the world’s intellectual, business, arts, cultural and social giants. [From 25-29 January] it has been a week of superlatives, the most participants, sessions, snow, media coverage… you name a record and we have broken it”

Surprise! Surprise! Malaysia was recorded to be the 21st best in performance from 142 nations, improving from the previous position of 26th.

But that was not what daring me to write this. As much as we should be proud of what our country had achieved, there will always be people who diligently opposed to this kind of recognition - of course the opposition, headed by “Mr You Know Who” - goes without saying. The opposition has been blasting bombs and grenades over Malaysian’s ruling coalition, bombarding BN as incompetent, corruptive and even calling them SUCKS! 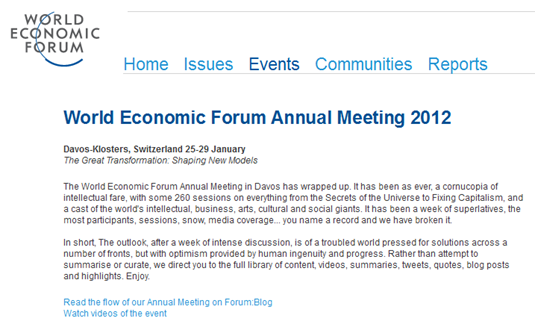 Little do they mind that Malaysia has performed extremely strong in certain fundamental areas such as education, infrastructure and government, ranking second in ASEAN after Singapore but definitely well ahead of other regional competitors.

Now there is one topic that infinitely stirs so much interest in politics – yes, corruption. From the beginning of Malaysian political history, opposition was spinning stories like nobody’s business. It is worth to note that Malaysia consistently sits in the same ranks of some major developed nations, although not necessarily ranked at the top of the game.

The rankings of Malaysia in certain areas of interest below carry merits to show how much our nation has developed: -

There is no zero corruption country in this world but Malaysian being 43rd overall (only one place behind the USA and third in ASEAN behind Singapore and Brunei), shows that the government’s zero-tolerance approach to corruption has paid off, and still improving.  Compared to our Asian neighbour, Indonesia where you can pay somebody to sit in prison for you? Think yourself how much better Malaysia is.

Scored 24th overall, 2nd in ASEAN behind Singapore, well ahead of France, Spain, Italy, the USA, Ireland, Belgium and a host of other European nations. Opposition PKR, Anwar appointed wife and daughter to hold senior positions… “res ipsa loquitur”… the fact speaks for itself.

Quality of the Educational system

14th overall, 2nd in ASEAN behind Singapore, ahead of US, UK and Germany. There are nearly 200 countries in this world with millions of children in other parts of the world grow illiterate. We are definitely luckier than them. Even we get better education than young people in America, Britain and Germany. Thanks to the Prime Minister, world-class education is free for the first time in Malaysian history.

Malaysia is at 19th overall, 2nd in ASEAN behind Singapore, ahead of Japan, India and Germany. In the past Malaysia has suffered from a ‘brain drain’, but action being taken by Prime Minister Najib is turning that around. New initiatives to retain our most talented people and attract back those who have left the country mean we are now better at holding on to skilled workers than the likes of Germany, Japan and India.

Malaysia is at 60th overall, 3rd in ASEN behind Singapore and Brunei. Despite Anwar’s talking down Malaysian economy, blaming the government for it, on a per-capita basis the tiny states of Singapore and Brunei are the only ASEAN members with a higher GDP. That doesn’t sound like mismanagement to us.

The opposition in the past had cited WEF report to show how much Malaysian government was falling. Now that facts have reversed, showing positive outcomes for Malaysia, I am dying to see how the opposition would swirl the recent WEF reports and turn it around to their advantages.

Well, overall can we now say “shame on you Mr Prime Minister” or is it Mr Anwar who should be ashamed of?

Let us sit and watch Anwar’s new game plan. In the meantime, let us look back and treasure the moments of our nation’s achievements.
Posted by u2 at 1:20 PM 1 comments

Parliament seating will end soon. Rumours spread that dissolution of parliament will be made soon after…
Leaving the early June as the right time for casting out votes!
Are you ready?
Are we? 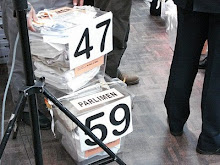 Young girl, violence, center of her own attention


The shades go down it's in her head
Painted room, can't deny there's something wrong

Don't call me,
She holds the hand that holds her down
She will, rise above 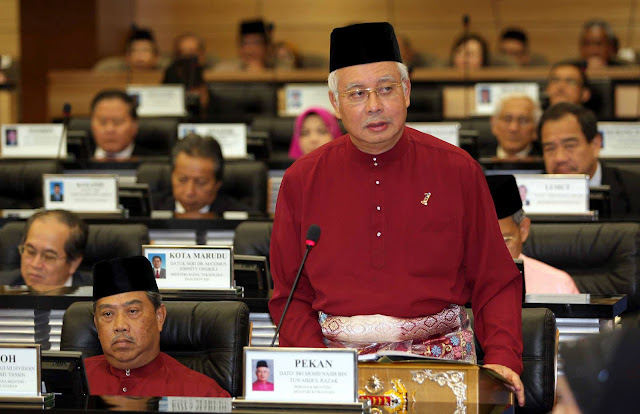 We often hear complaints about how time is getting shorter and that it is hard to get anything done in a day. Years passed by so suddenly that we barely notice that our child has turned into a teen. A year, basically feels like a month especially when we talk about putting our plans into work or even draw a plan itself.

For leaders, 3 years is usually considered as mere ‘warming up’ stage. Putting things and people at their right places, drafting goals and drawing plans and eventually implementing them sometimes would take more than three years. Sometimes a leader can only see the results after he has retired and sometimes won’t even have a chance to see his plans being executed at all.

However, such is not the case for Datuk Seri Najib Tun Razak. He has been warming up long enough, in fact since his childhood days as he witnessed his father serving the people day in and day out as Prime Minister.

Therefore, Datuk Seri Najib has been in full gear when he was assigned to the cabinet at the age of 25 as Deputy Minister of Energy, Telecommunication and Post in 1978.

When he succeeded Tun Abdullah Ahmad Badawi in 2009 as Prime Minister, Datuk Seri Najib was more than ready to make things happen for Malaysia. In order to do that, he has been whole-heartedly serving us with undoubted dedication and commitment. And come this 3rd April 2012, which is exactly three years in power, Datuk Seri Najib is not only able to witness how his ideas are being implemented, but how some of them have actually shown positive results. In other words, he not only got to witness the process of transformation, but the final transformed products itself.

In his Government Transformation Plans (GTP), Malaysian government has implemented many measures to increase transparency and government accountability. These measures include the use of Key Performance Indicators (KPI) to hold ministers accountable for their work, using new media such as Twitter and Facebook to communicate with citizens about happenings in the government, opening previously closed government tenders to increased public participation and scrutiny, and soliciting public feedback on government spending.
In merely 3 years, Datuk Seri Najib’s hard work and brilliance can be judged clearly from the table below:

Datuk Seri Najib is also quick to react to the rising cost of living. In order to ensure that it would not affect the rakyat, from 2010 to July 2011 alone, a total of RM36.7bilion was spent on cash hand-outs, subsidies and other form of assistance to the rakyat. Among the initiatives introduced under CoL are Kedai Rakyat 1Malaysia, 1Malaysia Rakyat Menu, 1Malaysia Clinics and Bantuan Rakyat 1Malaysia.

It is a shame that despite all these, the Oppositions of Malaysia continue to deny the goodness and the blessings that we consistently enjoy in Malaysia under the care of our leadership. Instead of spreading words about their accomplishments, the Oppositions keep trying to demean and degrade whatever that Datuk Seri Najib has achieved.

However, the facts laid out above and before our eyes are undeniable no matter how hard they try. Because figures don’t lie. But the Oppositions - the enemies of Datuk Seri Najib, do.

And lie is all they can do as they have proven to the rakyat that in 3 years, the Oppositions have not accomplished anything significant at all, in all 4 states under their rule.
Posted by u2 at 4:23 PM 1 comments

Good Morning all,
The Government Transformation Programme (GTP) team has launched a microsite (http://www.pemandu.gov.my/gtp/annualreport2011/) in the lead up to the Annual Report announcement by YAB PM on Apr 2nd at 8.30pm.


Please see below for the details and appreciate it if you can share with your colleagues, family & friends 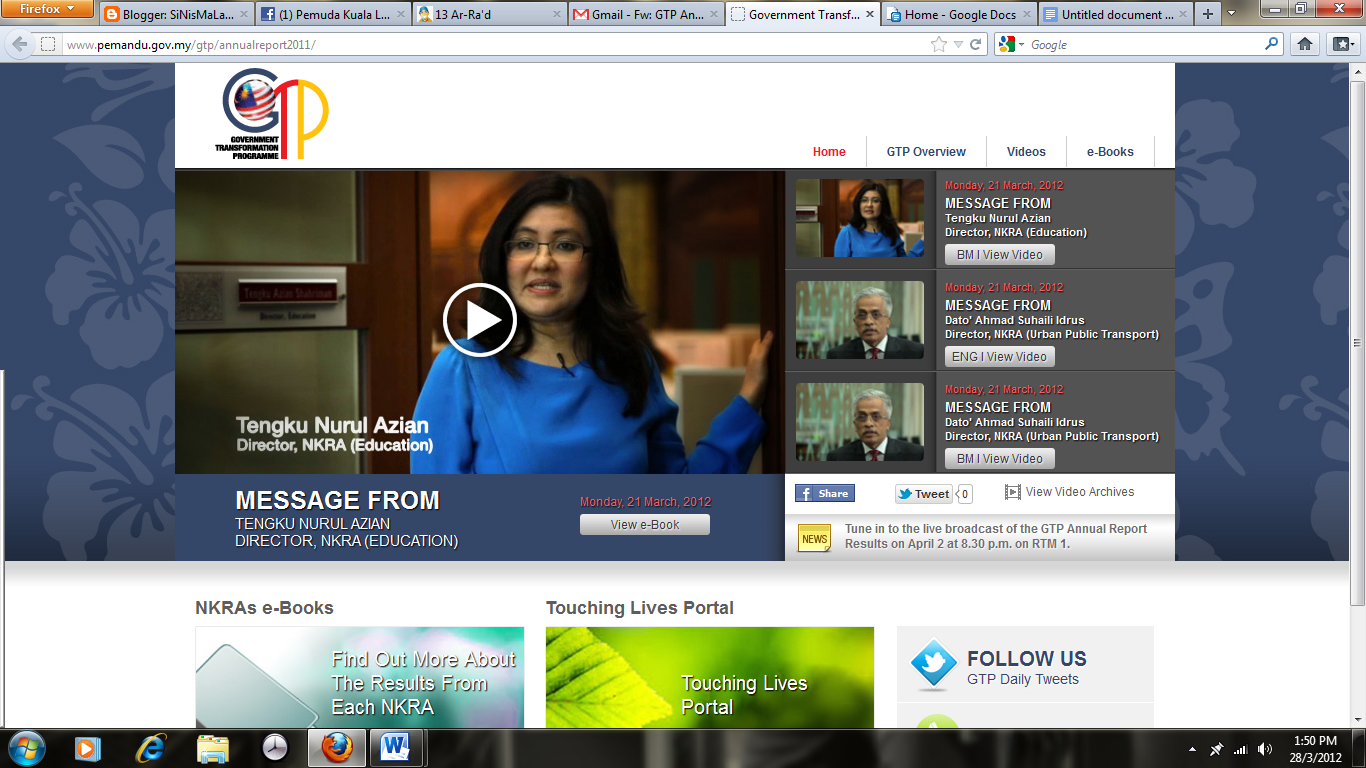 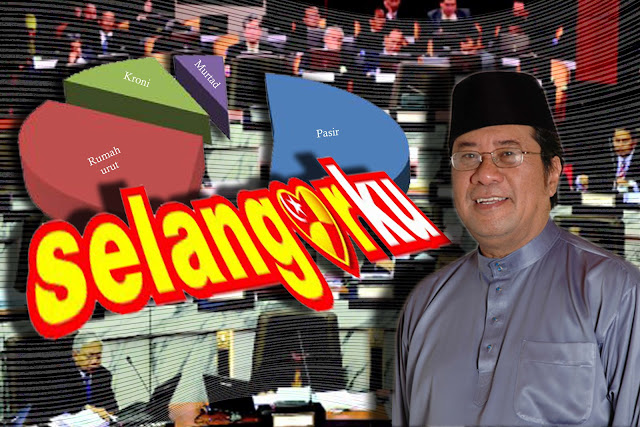 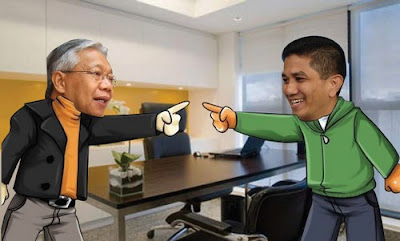 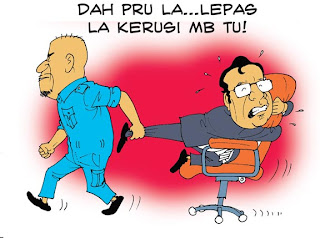 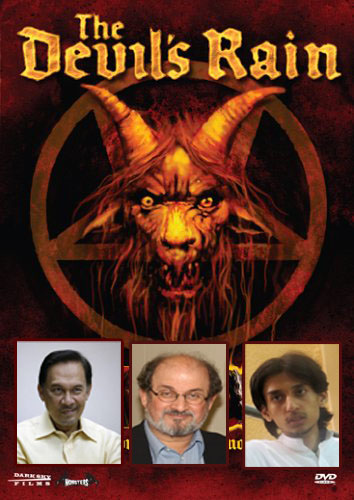 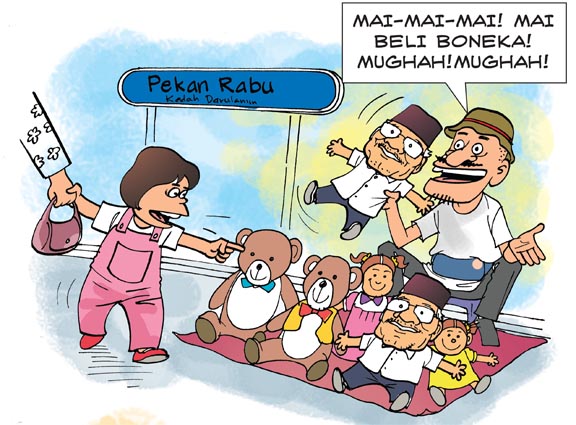 Is it true Mr. PM @NajibRazak, that UMNO has turned the EPF into its private cookie jar?

How true this allegations I received via email by someone who wish not to be mentioned his name.

UMNO-BN MUST CLEAR IT OUT !

I believe the hereinafter email has been forwarded to hundreds and thousands of people out there and honestly it disturbing people's feelings and emotions.

YOUR HONORABLE MR PRIME MINISTER MUST LOOK INTO IT LIKE SERIOUSLY. I MEAN, REALLY DAMN SERIOUS !

Umno has turned the EPF into its private cookie jar 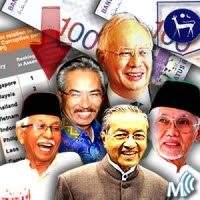 where did you sLeep last night?