Archive #101 - The Plague of Syariah Lawyers


THE PLAGUE OF SYARIAH LAWYERS


“Abu Huraira reported Allah’s Messenger (may peace be upon him) as saying: The strong-man is not one who wrestles well but the strong man is one who controls himself when he is in a fit of rage.”
Sahih Muslim Book 032, 6313
I had to read this Hadith over several times before I truly calmed down. The source of my anger? Fellow Muslim lawyers!!
I have, in the past, repeatedly telling my non-Muslim friends that ‘Islam’ is a perfect religion but the one who spoils and tarnish it, is human. To make it worst, these ‘human’ are Muslims.
Today, a friend complained to me about the attitude and behaviour of a Syariah lawyer. The reason why he voiced out his grouses to me is because I am a Syariah practioner too and by off loading his complaint to me, I think he feels that some changes can be made. He was ranting and raving so I did not want to prolong the drama by telling him that I can’t affect any changes in the system, unfortunately. So, after the storm had settled down, I repeated my phrase to him, “Islam is perfect but human are not”.
To tell you the truth, this is not the first time that I have heard such complaints. I have the privileged of practising in both Civil and Syariah law so I can actually make comparison between these two scenarios.
One obvious detail that I have noticed is that, in Civil courts, most complaints were about the judgment or the procedure but rarely about the lawyers. The reason why is, Civil lawyers are bounded by the code of ethic and any infringement of that code of ethic could very well jeopardise their case or even result in their case being struck off. The Rules of Court are to be abided by all, no exceptions .
For example, the rules regarding personal service of document such as summon, requires the person whose name is stated on the summon, to personally and physically accept the service of the document. He or she must sign their acceptance. If the document is left with another person, then it is not a valid service. If judgment is obtained based on an invalid or improper service, then the Judgment can be set aside as of right.
That is one example, another example is the service of bundle of documents or affidavit that will be used in a hearing. The Rules states that service of such documents must be 14 days before the hearing date. Any last minute service entitles the opponent to move the court for an adjournment, to enable them to peruse through the documents or affidavit and file a reply if need be.
The whole purpose and intention behind these Rules is to prevent any element of surprise between parties and also, honesty. 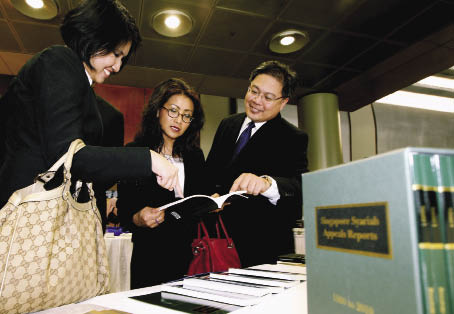 Unfortunately, I do not find the same code of conduct amongst the Syariah lawyers. First and foremost, these lawyers should remind themselves that they are Muslims and they are practicing Syariah law. The source of Syariah law is mainly Quran and Hadith. Most of the complaints about Syariah are not about the law but about the character and attitude of the judges and lawyers. The common complaints that I get from the public as well as fellow civil lawyers are:-


1)  Syariah lawyers are liars. They lie about a lot of things. They twist the truth to suit their case and win.


Ok. I see some people will argue that civil lawyers also lies so what is the whole fuss about? You see, civil laws are man-made. It is not base on any specific holy scripture. Civil lawyers are not all Muslims so they may not abide by the same moral conduct.


Syariah lawyers are ALL Muslims. As Muslims, we must always tell the absolute truth.


“ 'Abdullah b. Mas'ud reported Allah's Messenger (may peace be upon him) as saying: Telling of truth is a virtue and virtue leads to Paradise and the servant who endeavours to tell the truth is recorded as truthful, and lie is obscenity and obscenity leads to Hell-Fire, and the servant who endeavours to tell a lie is recorded as a liar. Ibn Abu Shaiba reported this from Allah's Apostle (may peace be upon him)” Sahih Muslim.
Syariah lawyers are syariah practioner, which means, their duty is to uphold the divine laws but if they can’t even get their attitude right, then perhaps they shouldn’t be advising other about Islam.
2)   Syariah lawyer never follows ethic.


This is quite a common complaint that I hear. It seems that syariah lawyers love to spring up last minute surprise on their opponents. One of their favourite routine is to serve important documents at the eleventh hours. Now, this is the part which I don’t understand. Why is there a need to stoop so low? If the client is in the right, then what is the harm of serving the documents on the opponent, well ahead of time? The very act of withholding documents is akin to lying.
3)   Syariah lawyers are rude, arrogant and holier than thou.


Ah…now this is a topic that make me go on and on. I have to say that I agree with the complainers because I have experienced it, myself countless of times. I know that I should not have expectations of people but to me, if a person is a Muslim and he or she is supposedly to be upholding the Islamic law, then their conduct and demeanour should have some element of Islamic values. Like it or not, if a person wants to called himself or herself a Muslim, then start acting like one. Do not tarnish the religion by being an ignorant fool. Furthermore, the privilege of having the knowledge of Islam does not make the person holier or better than the one who is in ignorance. More knowledge means heavier responsibilities.
“The Prophet Muhammad (peace be upon him) said: "A servant of God will remain standing on the Day of Judgment until he is questioned about his (time on earth) and how he used it; about his knowledge and how he utilized it; about his wealth and from where he acquired it and in what (activities) he spent it; and about his body and how he used it." - Al-Tirmidhi, Hadith 148
4)   Syariah Lawyers charges exorbitant fees.


Don’t get me wrong, I have nothing against charging a fee for work done. No one is willing to work for free and everyone has to make a living. The operative word here is ‘work’. More often than not, when a client sees the lawyer for the very first time, he or she is completely clueless about the law, hence, that is why they seek for legal advice. For civil law, though I myself do not charge for advice, I do understand why some other lawyers do. Like I said before, civil law is man-made, so knowledge about the law is an expertise but ignorant of the law is not a sin.


Syariah law on the other hand, is very much different. Syariah law consist mainly of law in the Quran and Hadith. As Muslims, we are supposed to know our own Divine Decree in the Quran and also we should know the teachings of our Prophets Muhammad SAW. For those who do not know the law in the Quran or Hadith, then it is the obligation of a fellow Muslim to share his or her knowledge. Hence, to me, to advise clients about God’s law and also the teaching of the Prophet SAW, should be willingly done and without charge. A lawyer can charge if there is work to be done but the fees should not be ‘loan shark’ rate.


In Islam, whether we like it or not, it is our obligation to share knowledge about Islam with our fellow brothers and sisters and even non-Muslim brothers and sisters. Even if law is your profession, can you honestly face God on Judgment day and say, “My Lord, I refuse to share your Divine law and Commandments because this person refused to pay me.” If that is the case, then this lawyer may just won his or her ticket to hell.
There are other complaints but these are the main and most common ones. Like it or not, the way that people judge Islam, is based on the conduct of Muslims. Any act by a Muslim is construed as an Islamic act, hence, a Muslim should depict the correct Islamic characteristic.
My advice to Syariah lawyers and also as mental reminder to myself, is, re-examine your intentions. Be a proper Muslim, inside or outside the Courts. Do not profess to be one but act completely against the grains of Islam. If your intention to be a Syariah lawyer is not for the sake of God but for the sake of money, then for your own good, leave. If you feel that you cannot conduct yourself in accordance to Islamic values, then leave the profession and do something else. Do not ruin the intergrity of the Syariah Courts that is already hanging by a thread. Do not go under the banner of Islam and act like a hooligan.
One of the Hadith that was imparted to me when I first studied Syariah and haunts me until now is
Narrated Umm Salama (radi Allahu anha), the wife of the Prophet (sal Allahu alaihi wa sallam): “Allah’s Messenger heard some people quarrelling at the door of his dwelling. He came out and said, ‘I am only a human being, and opponents come to me (to settle their problem); may be someone amongst you can present his case more eloquently than the other, whereby I may consider him true and give a verdict in his favour. So if I give the right of a Muslim to another by mistake, then it is only a portion of (Hell) Fire, he has the option to take it or give it up (before the Day of Resurrection).’” [The Book of Al-Mazalim: Sahih Bukhari]


In the past, I have always defended the Syariah system but today I find myself unable to do so. To me, the situation has deteriorated badly and if drastic measures are not taken soon, then the true spirit of Syariah will collapse completely.